Hey guys! I hope you all had a happy and fun 4th of July. Other than dinner at my in-laws, the hubby and I didn't do anything exiting to celebrate since the holiday fell mid-week. We both had to go back to work on Thursday unlike a lot of my friends so, I've just been sitting here envious of all their beach vacation photos they've been posting on facebook ever since. It's okay though... I have spiffy nails that I was able to paint in all my free time. 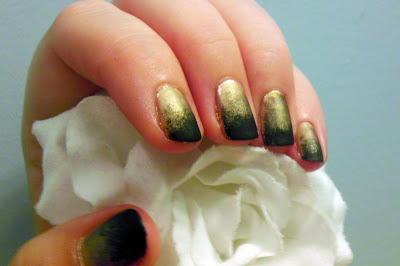 So for this manicure, I did a variation of the blue ombre nails from a couple of weeks ago. It wasn't a planned look... it just sort of evolved. I started out with plain gold nails using Sally Hansen Complete Salon Manicure Nail Polish in Gilty Pleasure. Then I suddenly got the idea to do the ombre look using Essie Nail Polish in Licorice sponged on with a disposable eyeshadow applicator. And since I'm never ever satisfied, I topped it off with a coat of China Glaze Matte Magic and ta dah! Fierce gold and black nails. 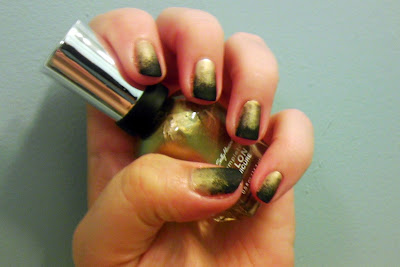 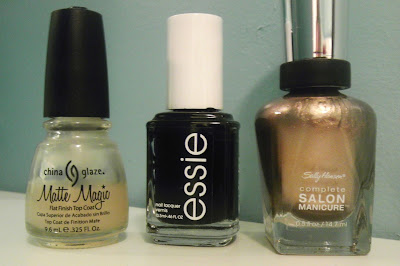 I really like the ombre look because it's so quick and easy but still packs a punch. People always notice them and I get a lot of compliments or questions on how in the world I did it. So, do you like the ombre look and what are your favorite color combinations? 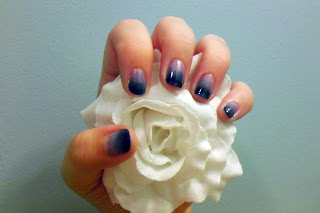 This is actually my 3rd manicure since my last post but the other two were nothing to write home about. This one is a little different though. I'm not 100% pleased with how it turned out but it was a experiment in a different way to paint ombre nails. I followed this tutorial from The Beauty Department.

I think it was definitely quicker and easier than stamping or dabbing on each color individually but I wasn't to thrilled with my color choice. I should have know better because we all know blue polish is the worst for staining skin. I used all Essie brand polish and from left to right they are Smooth Sailing, Mesmerize, and Midnight Tango. 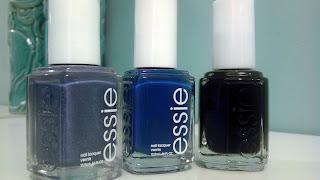 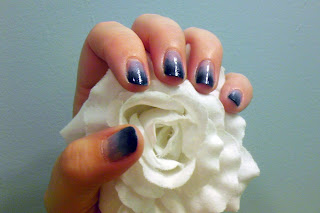 From start to finish, this whole look took about 20 minutes and 15 of that was spent getting the blue off my cuticles... it was the biggest pain. I'm definitely adding this style to my list of quick and easy mani's that pack a little punch and I can't wait to try it again. Next time, I'm thinking pink or silver with black tips. What color combos do you think would look good on ombre nails?

Thanks for reading!
- Kim

It's Been a While

Well, this is awkward... I know I said I'd try to start blogging again but as you can see, I sure as heck haven't. I know, I know... I suck. I haven't done my own nails in months! I've been getting the gel manicures at the salon since they last 2-3 weeks just because it's simpler and I can wash dishes without gloves (lamest reason ever). On the down side of that, I'm fair skinned and prone to freckles and moles so I'm not really feeling the whole UV light to cure the gel polish situation. Maybe I'm just being paranoid, but I avoid prolonged exposure to the sun and have never ever seen the inside of a tanning bed so I think the lamps at the salon might fall into that same category. Maybe? I don't know.

Anywho, I was going through my polish stash and tools reminiscing on the good times. (I miss you Konad.) I really want to get back into painting... I need a creative outlet and with the wedding insanity over, I can get back to doing my thing. So stay tuned... I have a few days left with my current mani and then it's going to be art time!

P.S. - What in the heck happened with the blogger format?? I am soooo confused!
Posted by Kim at 7:30 PM 3 comments:

Well, Look What the Cat Dragged In...

So, um... it's looks like I've been on a bit of an unintentional hiatus. First and foremost, I'd like to apologize to my followers for my disappearing act. My bad! Also, thank you guys for the messages encouraging me to come and continue blogging. That meant a lot to me!

So what happened, you may ask? Honestly, it wasn't any one thing particular but a combination of several. I work a full time job with required overtime (blessed to be busy!) and then my company reorganized and things got weird. I had to focus more on my job during the change but we're good and settled now so I can relax a wee bit. Then, as some of you guys may know, I'm getting married in 6 weeks from now so I've been busy wedding planning! That's been a whole other issue which would likely take several blog posts to explain the insanity that has become my wedding.

And then there's the lamest explanation of all: I suffer from what my fiance calls "Craft ADD"... I essentially go through phases. I'll sew for a while and get bored. So I'll start drawing and painting again until I get burned out on that. Then I'll make jewelry or read books or bake cupcakes everyday until I'm sick of those things. After months of painting my nails every few days, I was bored with it and ready to do something else. It's odd and I don't know why I'm like that but I am what I am.

As far as painting my nails goes, I've been getting gel manicures from the nail salon every two weeks. No fuss, no muss! So, I don't really know if I'll be getting back into blogging about polish specifically and I don't want to make any promises I may not be able to keep.

So that's the gist of things... I just wanted to let you guys know I'm okay and apologize for leaving you hanging! Until next time...

Email ThisBlogThis!Share to TwitterShare to FacebookShare to Pinterest
Labels: me, personal

Ahhh... October! I love the fall! It is my absolute favorite season... crunchy leaves, the crispness in the air, pumpkin flavored everything, the World Series, boots and sweaters. What is there not to love about this time of year? So, with that being said, here is my first official Halloween inspired manicure. My base cost is OPI Black Onyx with one coat of Sally Hansen Xtreme Wear in Pumpkin Spice on top. Good ol' black and orange! 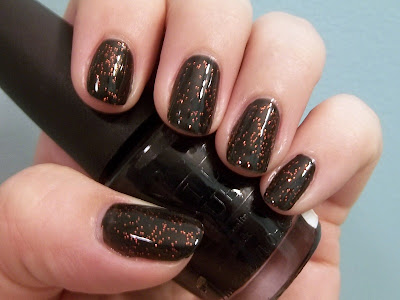 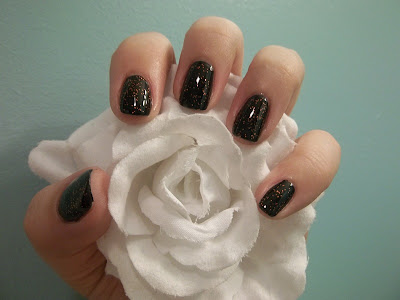 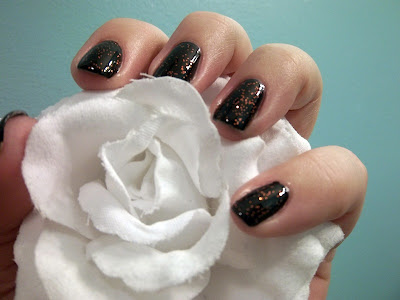 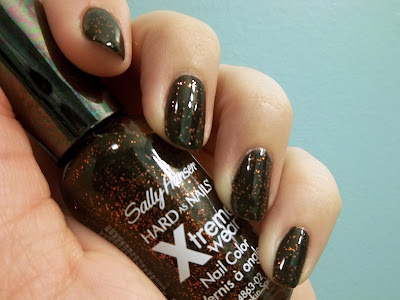 Hey guys! I was playing ball with Bella Roo yesterday and my nail on my pointer finger sustained a critical break. She got really excited and tried to grab the ball out of my hand. It was was the perfect storm of puppy teeth, a tennis ball, and a 3 day old manicure... there was nothing I could do to save it. So, I ended up cutting back all my nails since there was such an extreme difference in the lengths... broke my heart. :o( 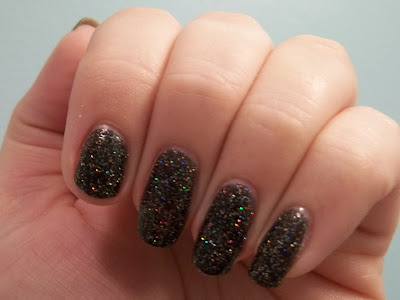 It's a wee nubbin!
Oh well, what can ya do? So anyways, I've seen several new takes on stamped zebra and tiger manicures in the past few days and I have to say, I'm a fan! I think my fave has to be this gorgeous number from That's So Fresh... I love the effect the layering created. So being inspired and with my conveniently shorter nails that make for easy stamping, I created my own version. 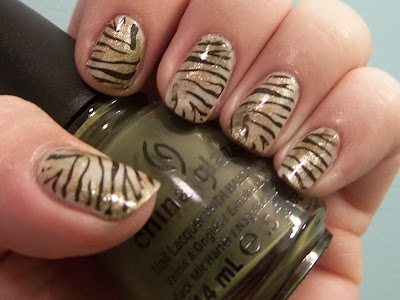 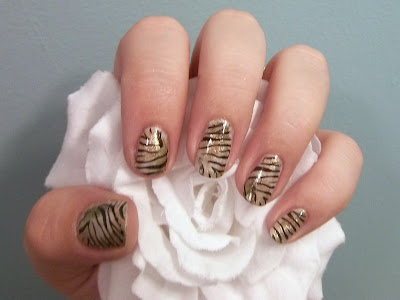 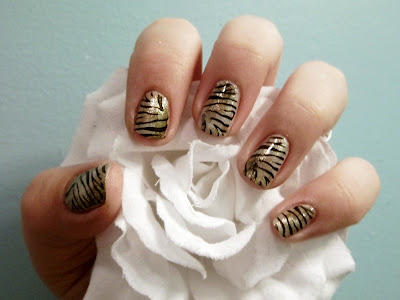 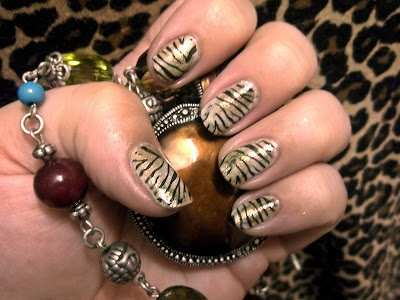 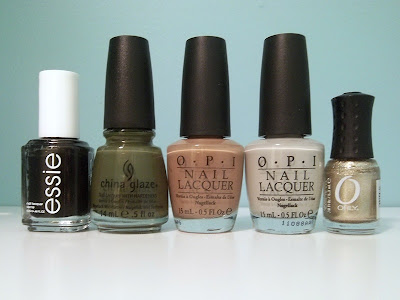 I used OPI Skull and Glossbones for my base color. Then I sponged on OPI San Tan-tonio, China Glaze Westside Warrior, and Orly Luxe in random spots. After that, I stamped on the zebra print using Essie Licorice with the Konad M57 plate. I started to use a white polish for my base but I wanted the look to be more earthy and fall-ish... I'm definitely glad I did!

Hey guys! After I made Puttin' on the Glitz, I officially caught the franken bug... I just could not wait to make another one! Sooo, I'd like to introduce you to Licorice Disco Ball: a black jelly polish with a holographic glitter. So shiny! 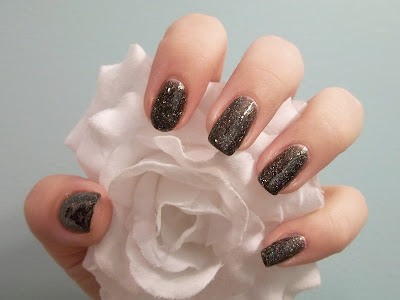 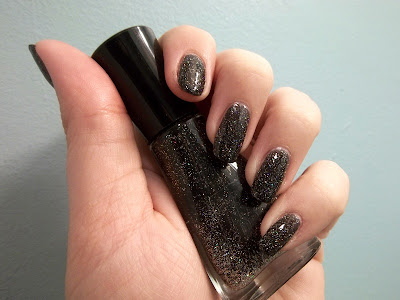 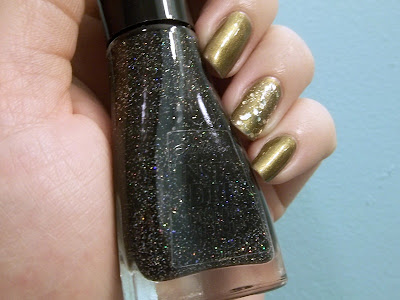 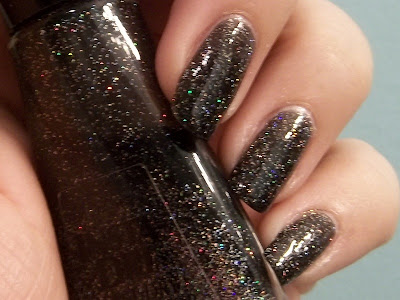 For Licorice Disco Ball, I actually started out with a half-full bottle of Sally Hansen Insta-Dri Clearly Quick top coat as my base. I added OPI Black Onyx bit by bit until I got the black jelly polish to depth I wanted... if I had to guess, I would estimate it was about 1/2 a teaspoon. Then I added a dash of Fantasy Makers Confetti glitter in Glitz and shook it all up. And voila... it's a Licorice Disco Ball!

At one coat, it's transparent enough to use as a layering polish and at two I could still see my nail line but it still looked okay. I used three out of personal preference for a nice opaque look. I like this one better than my previous franken. I used a lot less glitter so the finish is much smoother which is nice... it only took 1 thick coat of seche vite to smooth out the surface.

So what do you guys think? Have you caught the franken bug yet? 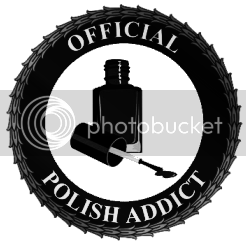 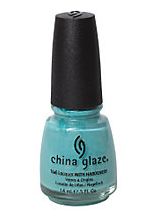